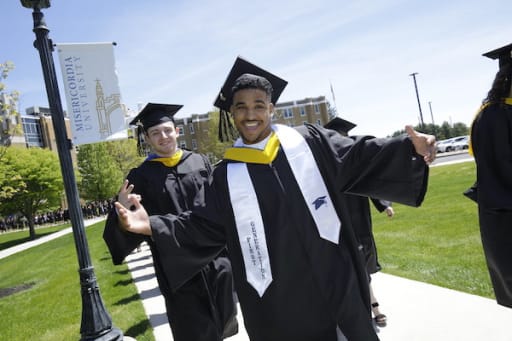 Graduates will be walking across the stage in May for the first in-person graduation in a year.

As safety restrictions are being lifted and the vaccine is available to every person over the age 16 in the U.S., university officials are preparing to host an in-person graduation.

Traditionally, there would be various events leading up to graduation for the soon-to-be graduates to commemorate their time at the university, including “50 Nights,” Baccalaureate Mass and a graduation rehearsal. Commencement would consist of two main ceremonies in the Anderson Center, where the stands would be filled with the graduates’ friends and loved ones.

Updates to this tradition were necessary to ensure everyone’s safety this year, officials said.

Students will be grouped according to their college. The College of Health Sciences will have the first two ceremonies, one beginning at 9 a.m. on May 15 and the other 11 a.m. The third ceremony at 1:30 p.m. will be for graduate students in business, occupational therapy, speech-Language Pathology, teacher education, and nursing. The Colleges of Arts, Sciences and Business will be the last group to go at 3:30 p.m.

Redington added that modified seating, procession and acknowledgment of the graduates will be in effect to maintain social distancing on commencement day. There will also be a chunk of time between each of the four ceremonies to give the previous group enough time to leave before the next one arrives, which will help reduce the chances of large groups of people congregating in one space.

To accommodate for the limited capacity indoors, all ceremonies will be live streamed at various location on campus, including Lemmond Theater, Insalaco hall classrooms 216-219 and the Henry Science Center rooms 210-212. This will also allow graduates to bring two additional guests to their graduation.

Redington said having an indoor ceremony was the best option for graduation because it reduces the risk of weather-related interruptions.

“The uncertainty of inclement weather was a major consideration in not having a larger ceremony in Mangelsdorf Field, which could not be covered and where distancing requirements would still limit guests and require multiple ceremonies,” he said.

Most of the events that typically would be held during this time, such as “50 Nights” have moved to Zoom. Students can pick up various gifts like their champagne glass during the week leading up to graduation and then enjoy a send off from the Alumni Association over Zoom on May 13 from 6 to 8 p.m.

Other events will still be held in-person with the proper safety precautions in effect. The Baccalaureate Liturgy will take place in the Anderson Center at 4 p.m. on May 14, and the annual Awards Ceremony will take place later in the evening at 6:30 p.m. in the same location.

Catherine Davey, senior occupational therapy major and upcoming graduate, said she is grateful to have the chance to walk across the stage.

“My sister’s college graduation last year was virtual, and as nice as the ceremony was, it wasn’t the same as in-person graduation. I’m thankful that Misericordia has modified the graduation ceremony to allow the class of 2021 to celebrate on campus with our classmates, friends and family,” Davey said.

For more details about the commencement schedule, visit www.misericordia.edu/commencement.