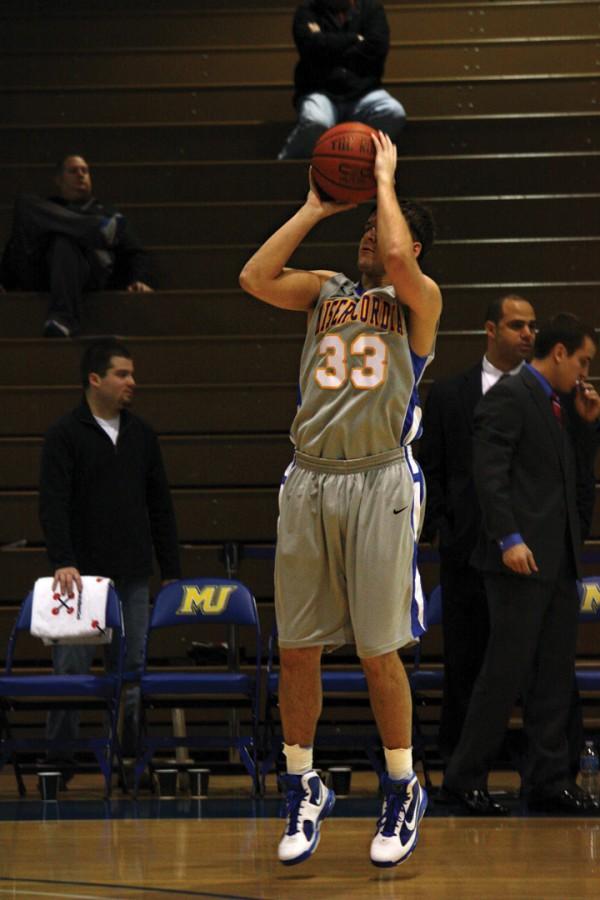 The first time Misericordia men’s basketball coach ever heard of Jeff Slanovec, was when he walked into his office during his freshman year at Misericordia.

Most players at the division three level are recruited prior to joining. However, the name Slanovec was not on coach Woodruff’s whiteboard.

“I wasn’t really a basketball recruit to begin with,” Slanovec said. “I was a baseball recruit here. So, coach had no idea who I was.”

Slanovec turned a less-than-average high school basketball career into a stellar college career. In high school, he scored just six points per game and was a non-factor in the Lehigh Valley.

It all changed when he got to MU. He doubled his average points per game from six to 12 and has started every game this season. He is also second in the team in average minutes played per game with just over 32 minutes per game. Defensively, he is second on the team in both rebounding and steals.

“I think it is a combination of a lot of things,” Slanovec said of why his game has improved so much since high school. “I definitely think it has a lot to do with the coaching staff. The offense we run fits my style and has really allowed me to do well.”

Head baseball coach Pete Egbert recruited the 6’3 senior to play baseball for the Cougars. However, he felt he had something to offer to the basketball team.

As a freshman, Slanovec was a role player. His main role was to come off the bench and shoot the rock.

“I spent my freshman year basically as a shooter off of the bench,” Slanovec said. “I would come in basically when the other team would go zone and we would need a scoring or three point spark off the bench.”

In high school, Slanovec was far from a scoring threat as he averaged just six points per game. But his teammates don’t only boast about his offense. Sophomore point guard Matt Greene feels Slanovec is the team’s best defensive player.

“In high school he wasn’t as aggressive both offensively and defensively. Now he is probably our best defensive player,” Greene said. “He communicates very well on the court and offensively he’s looking for his shot more which is what we need him to do.”

Slanovec feels the difference between his high school and college performance is confidence. At MU, he doesn’t have to worry about coming out of the game if he misses a few shots.

Misericordia Men’s Basketball Head Coach Trevor Woodruff and Slanovec got off on the right foot from when they first met due to Slanovec’s knowledge of the game.

“When I came in, I could tell right away that the two of us were going to be able to fit, because he liked that I knew the game of basketball and I was able to pick up plays quickly and scouting reports quickly,” Slanovec said. “I think that helped me get more and more playing time as a freshman.”

After getting quality minutes off the bench as a shooter, Slanovec found his way into the starting lineup as a sophomore and has been there ever since.

“As I moved into my sophomore year, I fit the role that coach wanted in the starting lineup and I just kind of took off,” Slanovec said. “I like playing in the system and it fits my style.”

Slanovec credits his success to Woodruff ‘s confidence in him.  That’s the most important thing to Slanovec and without it he feels he wouldn’t be nearly as good.

“I think coach really has confidence in his players to do what they do best, whether it is passing or shooting or rebounding, you are allowed the freedom to make plays that suit your game,” Slanovec said. “As a shooter, he has always had confidence in me to knock down shots, whether it’s from the three-point line or it’s a pull up jumper. Having that confidence from a coach as a player is big.”

One thing Slanovec tries to do each day is learn.

“I think we have to use everyday at practice and both in games to learn a lot about not just yourself, but a lot about the team,” Slanovec said. “The quicker you can pick up on things, the better you are going to be able to sharpen up on those things and it’s all about doing the little things. If you know something that you didn’t know the day before you are going to be much better the next time you go out.”

Slanovec’s daily approach has resonated with the younger player on the team, especially with Greene.

“I learn from him every single day,” Greene said. “He helps me a lot, mostly on defense. We all know we strive to be a defensive team. He never lets me slack off or be satisfied with my game, which is huge.”

He admits playing two sports throughout his 3 ½ years on campus has been tough. He learned quickly how to manage his time and even took one of his childhood rules to school with him.

“Playing two sports is an absolute grind, but I was taught from a young age that schoolwork always comes first. When I was a kid, I wasn’t allowed to go outside and play or practice until our homework was done,” Slanovec said. “I have kind of just taken that with me to college and I try to not procrastinate too much and get the bigger assignments done whenever I can, because I know that any day can become a four-hour road trip somewhere.”

He feels it also helps that both of his coaches’ respect and support that he plays two sports.

With every game, Slanovec has been getting closer to the 1,000 point milestone. If he does indeed reach the milestone, he will be the second Cougar to do so this season. The first was Ethan Eichorst. However, Slanovec doesn’t want to think about that now.

“I am pretty sure I am close, maybe 70 or 80 points (until his 1,000th),” Slanovec said. “But, honestly I don’t even care about that right now. We are in the playoff hunt and my main focus is winning games and getting better and better as a team as the season goes on.”