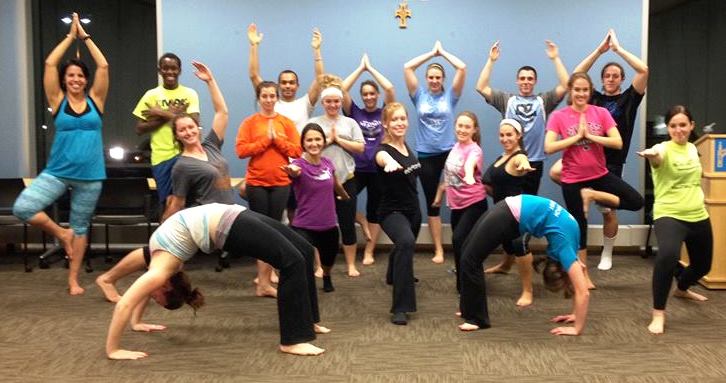 The Yogis are reaching up while reaching out to the community.

Members of the newly formed yoga club, called the Misericordia Yogis,   plan  to organize several service  events in the future.  The club meets every Tuesday night to practice yoga.

The club is also planning future fundraisers, including a yoga pants and t-shirt sale, Relay for Life and an outdoor yoga program. All proceeds would benefit charity.

LoPresti and Amanda Slaughter, club president and junior early and special education major, collaborated on the idea of an on-campus yoga club after realizing that it would be more convenient than having to travel to a studio to practice yoga. The pair contacted Miranda Russell,  owner of Lotus Pug Yoga in Wilkes-Barre,regarding instructors coming to campus.

“Miranda spoke to all of the instructors, and they agreed to come,” said LoPresti. Several instructors will visit campus on a rotating basis.

Slaughter said the club is beneficial for people who don’t have the means to travel off campus.

“There’s not really a lot to do in Dallas, and if you don’t have a car you are confined to campus.  It’s something different.  It’s not a club where you just sit and talk.  You get to do your own thing.”

Expense was a major deciding factor that led Slaughter and LoPresti to take the initiative to start the club.

LoPresti said there are studios that charge $5 per class, but the money spent on gas to drive to them adds up.

Membership is open to all faculty, staff and students, as well as the general public, including children.  Members are encouraged to bring friends or family members.

Fifteen to 20 people attend the sessions each week, and LoPresti participant numbers increase every week. “It strikes a chord with people because it’s an active club.”

Approximately 25 to 30 people can fit in the exercise space, located in the library, and if necessary, sessions can be moved to accommodate more yogis.

“We haven’t reached the point where we need more space, but that will always be an option,” said Slaughter.

The club uses Facebook to advertise. “When we post a thank you to the instructors, we tag Lotus Pug so our post ends up on their page. That is the extent of our advertising right now,” said Slaughter.

Slaughter and LoPresti post regular updates to remind members of classes and provide information about yoga topics. A recent post explained how props like blocks and straps can help everyone, from beginners to advanced students.

“I think it is a huge stress reliever for people.  I think it’s a major thing to get people moving and stretching because we are always hunched over our books. People complain of hip tightness, which is a big problem.”

Yoga mats and blocks will be available for loan through the library in the near future. A proper university identification card will be needed at the time of the loan.

Sessions are held every Tuesday at 8:30 p.m. in the McGowan Room of the library.  A $3 fee is payable by cash or check, and participants must bring water.

The club will hold elections before the start of the spring semester to fill the offices of secretary and treasurer.