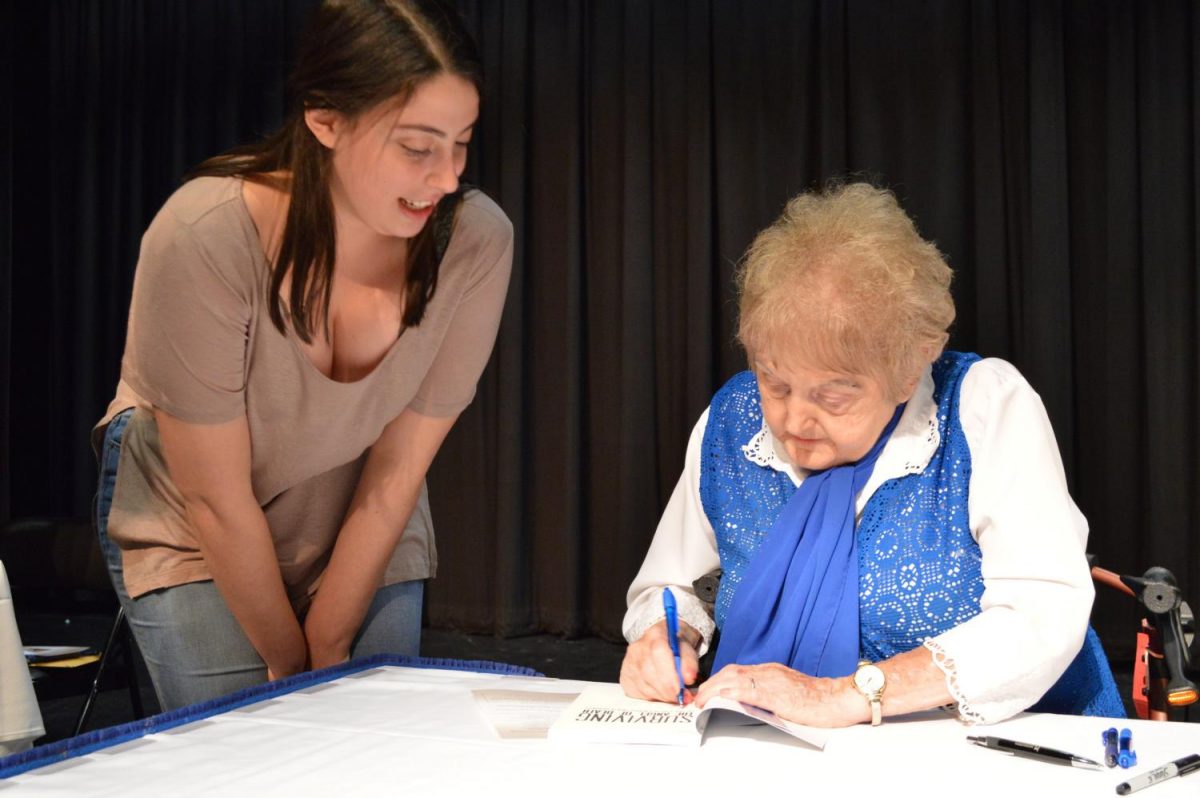 The long-awaited conclusion to the Deadly Medicine lecture series came Sept. 12 as Holocaust survivor Eva Mozes Kor spoke to a full house at the Lemmond Theater.

Dr. Thomas Hajkowski, associated professor of history and acting chair of the medical health and humanities program, was happy with how well attended the Deadly Medicine talks were.

“I was really pleased with how well attended Eva’s talk was in particular,” said Hajkowski. “I personally don’t think I’ve ever seen that many people in Lemmond for anything before, so that was really heartening.”

Hajkowski was involved with the Deadly Medicine series and gave his own lecture about Nazi nurses last spring.

Learning about Eva Kor’s personal experiences was humbling, and it was a very powerful way to end the speaker series, Hajkowski said.

The talk, “Triumph of the Human Spirit, from Auschwitz to Forgiveness,” detailed Kor’s experience as a human guinea pig at the hands of the infamous Nazi Dr. Josef Mangele. She reflected on the last time she saw her family alive, and the near fatal experiments inflicted upon her. She spoke of her experience with the tattooing of victims: It took four people to pin her down, and according to her twin, she bit one—although she has no recollection of this.

“I am still surprised by her ability to forgive,” said Hajkowski. “I think it’s an incredibly powerful message. Clearly it is something that she had to do for herself, but as someone who is really familiar with the kinds of atrocities that were committed by the Nazis, with the specific things that were done to Eva, her capacity to forgive— even after she explained it— is still something that is amazing.”

Eva Kor’s talk culminated in her personal reckoning with what Mangele did to her and her twin sister at Auschwitz, and how she found the strength to forgive. Kor perceived forgiveness as a type of free medicine.

Juliana Cofrancesco, sophomore English and secondary education major, attended previous Deadly Medicine talks, and she was particularly struck by the first in the series, Rabbi Kaplan’s “Can Good Come out of Evil?” She also attended Kor’s talk.

“I expected, just, I don’t know, just to learn. I took a Holocaust and Ethics class last semester, so I kind of knew a lot going into it,” said Cofrancesco, “so I wanted to get a more personal feel, instead of just reading from a text book, of what peoples’ opinions and thoughts and studies were.”

Cofrancesco had also read Kor’s book, and said the talk was a bit of a recap of that narrative.

“But I wanted to smush her face,” Cofrancesco admitted. “She’s so cute! I just, I loved her.”

While Kowalski and Blaskiewicz got tickets the first time Kor was slated to speak, Rowe had not.

“I knew about it,” Rowe said. “When the snowstorm came, we didn’t know what happened after that, and we actually just showed up today and one of the guys here had an extra ticket and he gave it to us.”

Blaskiewicz said she saw the Deadly Medicine exhibit, but did not attend any of the other talks.

“I viewed parts of the exhibit,” Kowalski said, “but I think that’s just the time of the year; it was so hectic that we didn’t have the opportunity to go to the talks.”

Kowalski did not know what to expect from Eva Kor, and Blaskiewicz and Rowe concurred.

“I expected her life,” said Rowe, “but I didn’t expect the whole in-depth talk on forgiving people, especially people who did all that to her.”

“I feel really good!” said Blaskiewicz “It was great to listen to her, and I think just her sense of humor is something that’s like, obviously the talk was so important, but just the fact that she could lighten it with humor was something that I really liked. And yeah, I definitely feel like I’m inspired by it.”

Rowe jumped in to add, “The way that she feels about it now is powerful, and the whole forgiveness heals you. You know a little minor thing we can be mad about is like nothing compared to her story, so that says a lot, too. Like if she can forgive them, why can’t you forgive someone else?”

Kowalski said she learned that everyone can make a change the world for the better.

“Like she is doing so much, and giving us hope, and telling us to have hope, and that each of us have a capacity for forgiveness, for hope, and to just change the world. I think it’s super amazing, and it’s empowering, a little bit. Just knowing that one individual can strive for so long, and never give up, it makes you feel like you can do anything too if she can.”