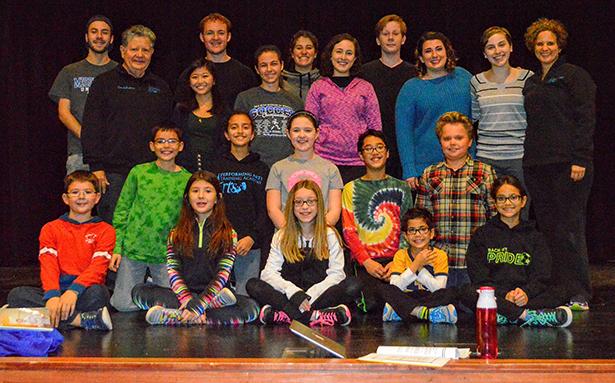 The group and the children take center stage for a photo opportunity.

Children ages six and up can receive vocal, drama, dance and music training at The Performing Arts Training Academy hosted by the university.

Dr. Cari Tellis, associate professor in the speech-language pathology department, is both founder and director of the Academy. She is a voice specialist with certification as a Master Teacher and Course Instructor in the Estill Voice training system.

As a voice scientist, voice therapist, and singer with over 16 years of experience as a voice specialist working with professional speakers and singers, Tellis teaches performers to be promoters of voice health. She hopes to instill healthy speaking and singing habits in her young performers.

“Our most intensive program is our three-week program in the summer. We begin the day warming up and training in voice, dancing and acting. We do this by splitting up into individual training sessions. Since we put on a show, a lot of the time is spent blocking and working on the show itself. We also do a musical at the end, and for the past two years it’s been an original musical that’s written by our acting coach. We infuse popular music as well as contemporary pop, classical rock and Broadway pieces into the show,” said Tellis.

During the winter workshop, Tellis focuses on voice and acting and performers practice for upcoming shows and learn skills such as the ability to recognize and use different voice qualities.

“We have two upcoming performances, “The Best Christmas Pageant Ever,” which is a story about a family of children who are misfits and who aren’t seen by their community as good people. They end up working their way into their church’s Christmas pageant. The story highlights the feelings between the misfits and the kids who have traditionally been in the Christmas pageant. We are also doing the “Sixth Candle,” which is a Hanukkah-themed story about a character whose mother is deciding whether he should have a bar mitzvah or not,” said Tellis.

Many students help Tellis at practices and even perform.

“I love having Misericordia students involved. They are a lot of fun and talented, and I think it is really awesome for our group of performers to work with college-level performers and get experience in that capacity. I think they have a lot to give us, while we also have a lot to show the students,” said Tellis.

“I was part of Dr. Tellis’ research team when she wanted to start PATA, so she brought it up to me and was thinking of ideas and I helped her, so I was involved from the very beginning. During the summer of 2014, we started our program and it was a two-week summer camp. Being part of PATA is so much fun, and I really enjoy doing voice therapy. I also enjoy seeing the kids grow up and progress in their acting and voice skills,” she said.

Other students have not been helping out for quite as long, but have high hopes for the future.

Nicholas Delmar, a senior speech-language pathology major who recently started volunteering, said the experience helps him to break out of his shell.

“I think being a part of this really has helped me become more outgoing and I’d love to help out again,” Delmar said.

Chantal Whiteduck, a freshman biology/pre-DPT major said she volunteers because she loves to act.

“I hope to get closer to everyone who is a part of this program,” she said.

Many participants in the Performing Arts Training Academy have been a part of the program from the very beginning.

Perhaps the most recognizable member is Sydney Tellis.

“My mom is Coach Cari Tellis, and when she started PATA, I knew I wanted to join it because I love acting. Although it was great from the beginning, the program has definitely gotten more structured. My favorite part of practice is bonding with fellow cast mates. It’s great to be around people who have similar interests as me, and I also think we have an awesome team of coaches, interns and helpers,” said Tellis, who is in seventh grade at the Dallas Middle School.